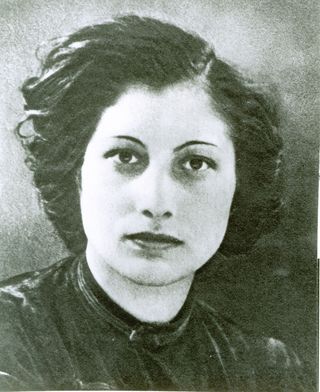 From Chapter Four: The Road Is Weeping

The Khan's had planned to take a train from Paris to the coast [in June 1940] and, from there, cross the Channel on any ship they could find. But after hearing news of the tumult in almost every train station in France, they decided to drive from Paris and board a train in a station that was reasonably calm. The only way to get to that possibly mythical destination was in her brother, Vilayat's, MG -- a great car for a picnic in the countryside, but not for a flight to safety during a war. With Vilayat and his mother up front and Noor and her sister, Claire, in the jump seat, they began driving the 148 miles to Tours, where they hoped a train would take them to the coast. They quickly learned that everything they had heard on the radio was true: the roads were filled with broken-down cars and broken-down people; and with French infantrymen, humiliated by their rout; and dead horses lying in ditches and thousands of people on bicycles, weaving in and out of the rabble… Everywhere you looked, mattresses were lashed to the tops of Renaults and Citroens and Mercedes. On the top of one car the body of a grandmother who had died en route was tied to a mattress because her son could not bear to leave her alongside the road.

All Noor could do was look directly from her perch in the MG into the eyes of the young and the old, the fit and the lame: all walking onward, feet swollen, shoulders slumped: a multitude of the weary. After years of spiritual pursuits at Fazal Manzil, Noor was not prepared for such sorrow.

Vilayat left the MG with one of his father's Sufi disciples in Tours. Finding their way to the train station, the Khan's found seats on a westbound train. Their coach was noisy and crowded, filled, as Noor observed, with "frantic young mothers with tear-stained eyes carrying their sleeping youngsters. They knew not where, just running toward freedom if freedom was to be found. Where were their men? It was useless to even wonder."

Noor and Clair had taken a Red Cross course so they could nurse wounded French troops. In their scramble to leave, they had forgotten their Red Cross certificates. Leaving their mother and brother in Le Verdon, Noor and Claire boarded a bus, hoping to find a Red Cross office in a close-by town that could issue certificates to them. The landscape they passed through was a combat zone. Some towns had been bombed. Others strafed. The worst was Saint-Nazaire. The day before, a German bomber had sunk a British ship. Too deep to enter Saint-Nazaire's harbor, the Lancastria waited offshore as 9,000 passengers were ferried to it… Around 4 p.m. on June 17, a Nazi pilot scored four direct hits on the Lancastria. Men who could not swim clung to the hull until the ship sank 20 minutes later. Enemy planes strafed thousands of survivors who were floating in the water; others drowned or choked on the thick, glutinous waves of oil spilling from the ship's tanks… The Lancastria suffered over 6,000 fatalities – the worst loss of life in British maritime history and more than the combined losses of the Lusitania and the Titanic.

In Saint-Nazaire, Noor wrote, "Noises ceased. Movement stopped. The town was stunned stiff… Throats were choked… A silent rage stirred the crowd." A seasoned fisherman was crying. A few Englishmen tried to console themselves by repeating that old bromide that had somehow comforted millions of their countrymen -- "There'll always be an England." Maybe so. That was consolation for another day. For now, the Nazis were in Paris and that the Tomb of the Unknown Soldier – France's sacred memorial to its dead from the last war with Germany – was, as Noor wrote, being "guarded by the enemy. God! It was worse than death!"

Noor and Claire headed back to Le Verdon. That took almost 24 hours. Bombs had made many roads unpassable and German strafing had wrecked many of the buses that were still operating. At night, all was black; the blackness gave Noor and Claire cover from German planes and snipers. Upon their return, Vilayat was furious they had been gone for so long. With great effort, he had found space for everyone on a Belgian cargo ship. If Noor and Clair had returned any later, they would have been stuck: France would be handed over to the Germans in a few hours.

The Khan's boarded the Kasongo on June 19 -- a battered freighter infested with beetles. The day was clear and blue, with calm, dazzling water and a few other ships visible in the distance: a liner that had been pressed into service; a yellow ship with a yellow cross; a destroyer whose presence cheered everyone. At night, the Kasongo's deck was covered with bodies wrapped in coats and blankets. In the moonlight, they looked like corpses, moving only occasionally to pour tea from thermos flasks. The Khans didn't care about the discomfort or about the beetles. They were out of France.

Three days later, the Khans reached Falmouth, a picture-perfect English town. Lovely as it was, there was no time for repose or reflection. The docks were almost as crammed as those in France and fear of a German attack was palpable and not unreasonable. A bus drove the Kasongo's passengers to a large building where officials processed the newcomers' papers with British order and tidiness. The refugees were then ushered into a garden where ladies in green/gray Harris tweed uniforms offered lemonade and sandwiches. Without a single extra thread of clothing, the Khans boarded a train to Oxford. Vilayat was familiar with the town after attending the university there. A bed and breakfast took them in – four tired, hungry refugees who had no idea what to do next.

The day after Noor landed in Falmouth, Hitler toured Paris. The Fuehrer's procession of black convertibles prowled the empty, early morning streets, sped down Rue La Fayette to the Opéra de Paris, the largest theater in the world; then on to the Eglise de la Madeleine, a magniﬁcent Roman Catholic church built as a tribute to Napoleon's armies; and after that to the Champs-Elysées where Hitler, grabbing the windshield of his Mercedes, stood up to survey the vista. Ordinarily teeming with cars, cyclists, and pedestrians, the wide boulevard was deserted. As the convoy swept past the Arc de Triomphe, Hitler got out and posed for a photo with the Eiffel Tower in the background. Looking slightly upward and toward his right, with the tower over his left shoulder, Hitler evinced no pleasure. Only a stolid, blank presence. Crossing the Seine, Hitler paid a brief tribute at Napoleon's tomb, then cruised through Montparnasse and the Latin Quarter, and Ile de la Cité and Notre- Dame, and scanned from the highest point of Montmartre the city that was at his disposal. On his return ﬂight to Berlin, Hitler told Albert Speer, his favorite architect, "It was the dream of my life to be permitted to see Paris. I cannot say how happy I am to have that dream fulﬁlled today." He never returned.

Noor would return. The young woman who had written poems about fairies since she was a child would attend to less fantastical matters that she had barely known existed. A recent poem of Noor's had ended with an admonition to herself to

That was the last time Noor wrote about fairies.